At the reunion marking their 55th year since graduation, several members of the class of 1952 decided five years was too long to wait to meet again. As a result, they scheduled an all-day celebration on Sept. 24 to mark their 57th year. 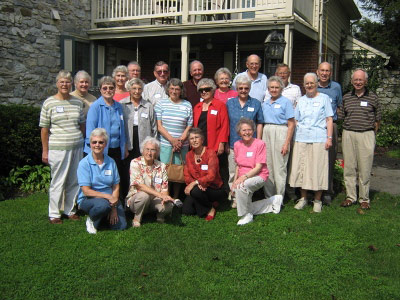 The day began with breakfast at Rocky Acre B & B, the farm home of class member Galen Benner and his wife Eileen. The morning included a tour of their home (once a station on the Underground Railroad), a hayride, and a parade of a few of Galen’s collection of John Deere tractors.

Then the group went into Lancaster for the presentation of “Living the Experience” at Bethel A. M.E. Church, a reenactment of stories of slavery, faith, and the Underground Railroad. They enjoyed a meal together there.

The last stop was LMS. A tour of the Rutt Academic Center was led by Matt Weaver from LMS. He is a grandson of Velma Bontrager Weaver, a deceased member of the class of ’52.

At a light supper in the dining hall, former teacher J. Lester Brubaker spoke, reminding the class of many of the poems they had studied in English classes. He noted that several of the class have joined him at Landis Homes. The class song, the class poem, and words of wisdom from class president Richard Weaver were also part of the program.

It was a good day for memories and learning for the 28 class members and 18 others present for all or part of the day’s activities.