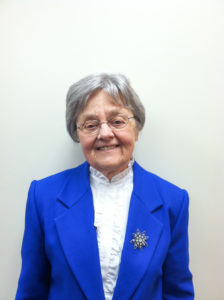 When the Harrisburg Rotary Club named Lena Horning Brown the 1986 Volunteer of the Year for her involvement in helping Vietnamese and Laotian refugees resettle in the Grantham, Pa., community, Brown’s response was, “I wasn’t looking for honors. I was just doing the work God called me to do.”

A year later Brown became the first woman in the Lancaster Mennonite Conference to receive credentials for pastoral ministry. Again, Brown wasn’t seeking attention for herself.

“I didn’t think about blazing a trail,” she said. “I just thought about getting back to work” (Louise Stoltzfus, Quiet Shouts: Stories of Lancaster Mennonite Women Leaders, Herald Press, 1999, p. 153).

On Saturday, April 26, during the school’s annual dinner theatre, Lancaster Mennonite School celebrated that humble spirit and obedience to God when Superintendent Richard Thomas named Brown the 2008 Alumna of the Year.

“In her public service at home and abroad, in her extraordinary care for others, in her gift of teaching, and in her commitment to her master, she exemplifies the best that Lancaster Mennonite can hope for in her graduates,” he said. “Always Lena responded to the call of the church, but she never alienated people through pushing herself forward and was, in fact, a model of Christian grace. A book title, ‘You were gentle among us,’ would be very appropriate for Lena.”

Returning to the States in the mid-1970s, she plugged into Slate Hill Mennonite Church, where she gave leadership to helping Vietnamese and Laotian refugee families resettle. Her work ranged from finding apartments and furniture to all kinds of social service tasks such as getting medical assistance cards and locating jobs. She also taught a Lao Sunday School class. It was in recognition of her service that Brown was called to be deaconess at Slate Hill in 1987 and as associate pastor in 1996.

Brown also served on the board at Eastern Mennonite Missions 1985-97 and on their Executive Committee 1994-97. Today she and husband Michael are retired and live in Denver, Pa. They attend Gehman Mennonite Church, Adamstown, where Brown teaches adult Sunday School and in the Released Time Religious Education program. In addition, she serves on the church’s Outreach Team and assists in the Book Savers program. The Browns have two children—Miriam and Lowell— who both attended Lancaster Mennonite. Lowell graduated from LMH in 1990.

Brown talks about her LMH experience:

During the LMS Dinner Theatre, Brown told over 200 guests about

her early dreams to become a teacher and credited her own teachers, including those at LMH, for encouraging that dream.

“It was here that I met … great teachers who modeled for me the master teacher, Jesus,” she said, “teachers who showed concern, who cared for the individual student, and who took time to listen.”

“Brother Lester Brubaker was one of those,” she continued, describing a recitation assignment in which she pronounced “vine” as “wine” in John 15’s vine and branches account—much to her embarrassment and to the enjoyment of the class.

“I was far too Dutchified to know what amused my classmates,” she said, “but kindhearted Brother Brubaker pulled me aside, explained their mirth, gave me pointers on how to improve, and restored my self-confidence.

“It is not only for LMH teachers that I am thankful. I am also thankful for our chapel periods, times of prayer, student programs, Bible classes, and opportunities to build wholesome, lasting friendships with both students and teachers. Lancaster Mennonite gave me what I needed in a very formative period of my life. It helped to reaffirm my commitment to Christ and the church and it gave me the foundation I needed to pursue my dreamed-of teaching career.

“Perhaps most important, LMH gave me the foundation and challenge to pursue further service for Christ and the church. When we graduated, the motto of the class of 1952 was “He Goeth Before”—a wonderful reminder that Jesus, our Shepherd and guide, leads his children. I can testify to the truth of our motto. It is only because of his goodness and guidance in my life that I stand here tonight.”