The club advisor, LM mathematics teacher Rachel Thomas, had a core group of six sixth-graders who came to all the meetings and competition practices, and from those six, she composed a competition team of four students for regional competition.  Despite being young — most teams have eighth-graders – the team held its own against teams of older students. “We didn’t win anything,” Thomas noted, “but we also didn’t finish last.”

After the competition, that core group continued to work on enrichment projects and practice problems. Thomas submitted their work to MathCounts for Silver Level consideration, which the club received in April. After receiving Silver Level status, they got started on a project to reach the Gold Level, which was to compose a math game. 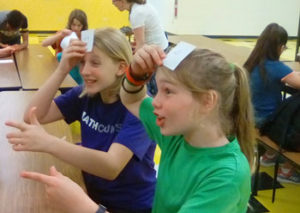 The game the students created, “MathBands,” is similar to the popular Hasbro game “Headbanz.”  Students draw a numbered card and place the card on their foreheads for other students to see. Students attempt to discover the numbers on their foreheads by asking questions such as, “Is 4 a factor?” The game requires fluency with multiplication facts at a fourth-grade level.  In addition to providing skill practice for multiplication facts, the game encourages critical thinking by forcing students to be efficient in their guesses and to make rapid conclusions based on limited information.  When submitting the project for gold-level status, the students included a written document outlining the game’s mathematical underpinnings as well as suggestions for making the game more challenging for older students. To refine their instructions, MathCounts team members presented the game to students in grades four through six. “It was a big hit!” Thomas reported. “The students guessing as well as those providing clues and answers were engaged in the fast-paced game play.”

“I couldn’t be prouder of my team this year,” Thomas said. “I am looking forward to capitalizing on this momentum to make our experience even better next year.”

MATHCOUNTS was founded by the National Society of Professional Engineers, National Council of Teachers of Mathematics and CNA Foundation to give students the opportunity to engage in mathematics that is non-competitive, fun and different from “textbook math.”  Silver Level status recognizes and rewards those clubs with a high level of participation. Silver Level clubs receive a trophy, certificates for students and entry into a drawing for a $250 gift card.  Gold Level status recognizes and rewards those clubs that have already achieved Silver Level and have demonstrated a high-level of success. Clubs must complete a Gold Level Project in order to be considered for Gold Level status.