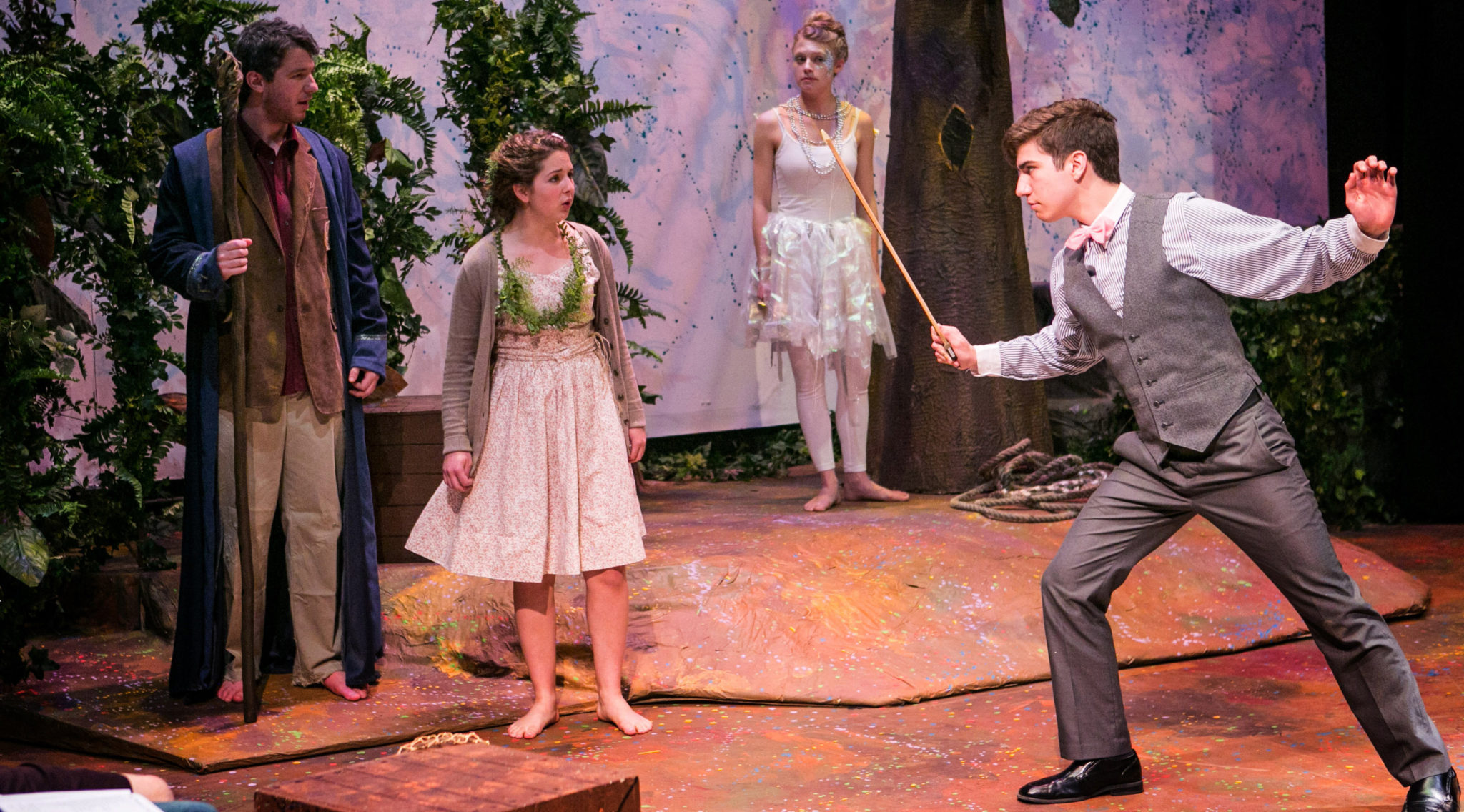 Fulton Theatre named Lancaster Mennonite High School as the 2015 Beth Bash Award recipient for the production of William Shakespeare’s The Tempest. Play director Danielle Hofstetter accepted the award plaque, and the student actors and crew were recognized at the Fulton’s performance of The Wizard of Oz.

Since 1986, Fulton Theatre has recognized outstanding achievement of regional high school students in their musical and play productions. The Beth Bash Award honors the performances of the youth both onstage and offstage. A panel of judges, composed of Fulton Theatre artists and educators, select one winner each school season. Judges score student work on projection and articulation; characterization; understanding text and purpose; ensemble, communication and focus; and professionalism.

The LMH students performed The Tempest using a “three-quarters round” format in which they were closely surrounded by the audience on three sides and could interact with show-goers. The close interaction between the cast and the audience showcased the students’ acting ability.

The work of the students behind the scenes was also evaluated and recognized by the Beth Bash Award, and kudos went to those involved with stage management, props, makeup, lighting, sound and set construction as well as those in front of the spotlights.

Although the Beth Bash Award is designed to honor the performances of the youth both onstage and offstage, director Hofstetter can be credited with doing an excellent job in maximizing the abilities of the cast and crew. Hofstetter has directed many shows over the last nine years at Lancaster Mennonite High School. She holds a B.A. in English/Theater from Eastern Mennonite University, a master’s degree in Renaissance Literature and Performance from Mary Baldwin College, and an MFA in directing from Mary Baldwin College. Her graduate training and professional work has been focused on Shakespearean works.

Written in 1610–11, The Tempest is thought to be the last play that Shakespeare wrote. The play was set on a remote island, where Prospero (Dan Kachnycz), the rightful Duke of Milan, plots to restore the fortunes of his daughter Miranda (Madeline Mast) using illusions and skillful manipulation. He conjures up a storm — the tempest — to shipwreck his usurping brother Antonio (Aris Marinos) on the island, along with Queen Alonso of Naples (Mikayla Eby), her son Ferdinand (Josiah Nisly) and sister Sebastian (Abby King). There, Prospero’s machinations reveal and reverse Antonio’s treachery while bringing about the marriage of Miranda to Ferdinand.

Ariel (Emily Peifer), an “airy spirit” in Prospero’s service, played a significant symbolic role in contrast to Caliban (Andrew Milligan), a man who is half beast, who also served Prospero while hating him and plotting against him.