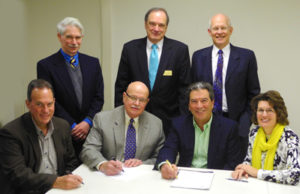 LMS Superintendent J. Richard Thomas said, “We believe there is a positive witness in our community as we two Christian organizations join together as one school. Our goal is to expand Christian education in central Pennsylvania.” Now officially called Lancaster Mennonite School—Hershey Campus, the campus offers a solid educational program that equips students to live faithful, God-honoring lives, said Thomas.

As a whole, Lancaster Mennonite School now has an enrollment of more than 1,600 in pre-kindergarten through grade 12.

Whereas Lancaster Mennonite School was originally founded in 1942 to serve Mennonite students, persons from many denominations increasingly became part of what is now an interdenominational student body. Each campus eventually served a diversity of Christian families who wanted an excellent education in a Christ-centered atmosphere that emphasized personal faith and discipleship, or as Thomas says, “a school where Jesus is the center of faith, community is the center of life and reconciliation is the center of work.”

LMS remains committed to the core values of Anabaptist Christian faith, most of which are shared by persons involved with Hershey Christian School, just as they are by Christians from many faith traditions at other campuses of Lancaster Mennonite School. At both Lancaster Mennonite School and Hershey Christian School, the plurality of families currently identify themselves as attending independent or non-denominational churches.

Albert Roth, the headmaster of Hershey Christian School, will remain in leadership at the Hershey location. At a meeting of school officials to sign the papers that would merge the two schools into one, Roth thanked God for guidance and direction in leading the schools to join together.

“It is a privilege for Hershey Christian School to become part of Lancaster Mennonite School. We believe that we will be better able to fulfill our shared vision of well-rounded, Christ-centered education that equips students to live faithful, God-honoring lives whatever their occupations or callings.”

Superintendent Thomas said, “These are exciting times. We believe this acquisition is in keeping with our missional Christ-centered vision and is a way to grow the peaceable reign of God.”

The public is invited to a “gathering, vision and celebration” event Monday, March 9, at the Hershey Campus, 1525 Sand Hill Rd, Hummelstown. A student jazz band will perform at 6:30 p.m., followed by a short program at 7 p.m. The main focus of the evening is for parents, staff, students and friends of the Hershey Campus and our other campuses to meet and celebrate together. Tours of the school and light refreshments will be provided.